Home » The Canadian Press » Providers Have to Invest to Meet Growing Demand for Mobile Use: Bell CEO

Providers Have to Invest to Meet Growing Demand for Mobile Use: Bell CEO 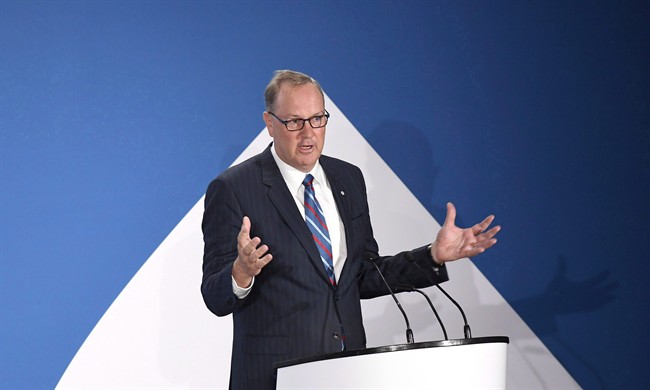 George Cope, President and CEO of BCE Inc., speaks during the 2017 annual general shareholders meeting in Ottawa on Wednesday, April 26, 2017. Cope says his company and its competitors have to invest in infrastructure to keep up with a booming consumer appetite for entertainment both at home and on mobile devices. (THE CANADIAN PRESS/Justin Tang)

WINNIPEG – Internet and mobile providers must invest in infrastructure to keep up with a booming consumer appetite for entertainment both at home and on the go, Bell Canada Enterprises CEO George Cope said Tuesday.

High-speed mobile data usage is up 37 per cent from just last year, while the amount of data streaming over the Internet has more than quadrupled in five years, Cope told the Winnipeg Chamber of Commerce.

“The incredible growth we’re seeing in wireless, we think it’s going to continue. Video on wireless is clearly just an explosion,” Cope said.

“We have to stay ahead of the capacity requirements to make sure the country’s economy itself is running on the back of all these networks. But, also, we have to increase the speeds of these services because of … the amount of usage that we’re seeing.”

Bell (TSX:BCE) is on track to invest $20 billion in its networks over a five-year period that ends in 2020, Cope said, and competitors are also spending money to meet a growing demand for speed and reliability.

A report last month by the Convergence Research Group estimated that TV subscriptions in Canada will drop by 247,000 this year, up from 220,000 subscriber losses in 2016. Last year marked the first time Canadians spent more on Internet access than on TV subscriptions, according to the CRTC.

The company has promised to spend $1 billion over five years on improvements in Manitoba such as bringing LTE-Advanced mobile service, which could double existing speeds. Critics, however, have said prices are likely to rise now that low-cost MTS has been swallowed up.

As part of the takeover deal approved by regulators, more than 100,000 MTS wireless customers are being sold to Telus. Cope said both companies will be vying to keep or regain their customers.

“Once customers have moved to where they’re going to be, then it’s an open market and it’ll be a competitive market.”