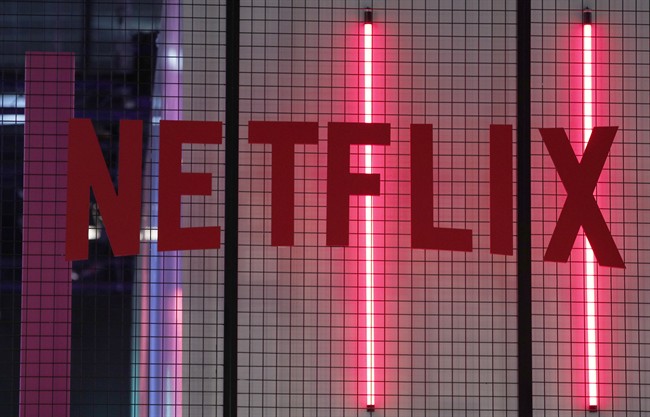 The logo of American entertainment company Netflix is pictured at the Paris games week in Paris, Saturday, Nov. 4, 2017. (THE CANADIAN PRESS/AP/Christophe Ena)

Radio stations and cable providers over a certain size have to pay into the Canadian Content Development Fund and Canadian Media Fund. These organizations provide money to help fund the production of Canadian television, film, music and digital media. Canadian broadcasters have complained that it’s hard to compete with international streaming services that don’t have these extra costs. It’s a legitimate complaint as many Canadians abandon cable and satellite TV.

Earlier this month, the Canadian Radio-television and Telecommunications Commission (CRTC) released a report about the future of programming distribution in Canada. The report’s goal was to look at a future environment that will support a vibrant domestic market that will remain competitive in the new global environment. Among their recommendations was the need to impose a levy on online music and video services to help fund the creation and promotion of Canadian content. The CRTC has said that the proposed levy won’t result in more money, just a redistribution of where it comes from. Essentially, this would apply the old rules to new media.

When broadcasters had to create physical infrastructure to reach Canadian consumers, it was easy to charge levies and enforce Canadian content requirements. But today, we are consuming media from too many sources for that to be feasible. How could the government go about charging all of these companies to build the Can-Con slush fund? They can’t, instead, they’ll charge internet service providers and it’s impossible to see how that won’t increase the already high prices Canadians pay. The problem is that not everyone is using the internet to stream movies and music and for many, it makes up a small part of what they do online.

The Canadian Media Fund, which deals with film, television and digital media, distributed $361 million in funding to 1,500 productions in 2016-17. Among the big funding winners were the popular show “Heartland,” which received almost $10 million for its 10th season, and “Alias Grace,” a miniseries based on Margaret Atwood’s 1996 novel of the same name, which received over $4 million. I think they would have been made even without this funding. They, and many others, are popular and good programs can stand on their own. Of the other funded programs, I’d be hard-pressed to find 20 familiar titles.

If our concern is telling Canadian stories and maintaining our culture in an increasingly globalized world, news media is doing this far more effectively than a 30-minute sitcom on CBC ever could. When the government has already said that supporting news media in the face of international competition this is not worth funding, how can entertainment be? Forcing an unwieldy regulatory regime on international companies or Canadian internet service providers isn’t going to make Canadians watch shows they don’t care about or music they don’t like. Maybe Can-Con’s days are over.