Home » The Canadian Press » Canada Aiming for the Moon, and Beyond, with New Space Technology Efforts

Canada Aiming for the Moon, and Beyond, with New Space Technology Efforts 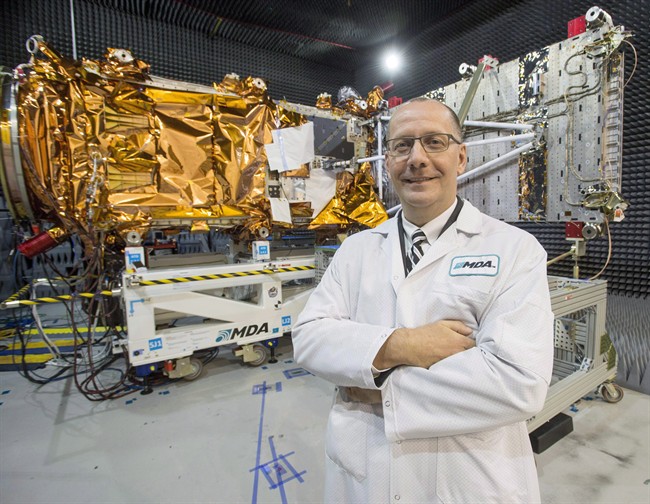 MDA’s President Mike Greenley is seen in front of one of three RADARSAT Constellation Mission spacecrafts being built for the Canadian Space Agency at the company’s facility in Sainte-Anne-de-Bellevue, Quebec on Tuesday, January 30, 2018. With an eye on future lunar exploration, Canada’s space agency is calling on companies to present their ideas for everything from moon-rover power systems to innovative mineral prospecting techniques. (THE CANADIAN PRESS/Ryan Remiorz)

OTTAWA – With an eye on future lunar exploration, Canada’s space agency is calling on companies to present their ideas for everything from moon-rover power systems to innovative mineral prospecting techniques.

The Canadian Space Agency issued the tender this week for projects that will put Canada in position to contribute to future space missions involving human and robotic exploration of the moon.

The idea is to demonstrate technologies at agency headquarters in Saint-Hubert, Que., next year with possible follow-up testing in the Canary Islands in 2020.

Canada is already quietly working with space agencies in Europe, Japan and the United States on the next phases of exploring the final frontier.

As a step toward a mission to Mars, U.S. space agency NASA is spearheading the Lunar Gateway, an outpost that would orbit the moon. Through the Gateway, four astronauts would have access to the moon’s surface for weeks at a time to carry out experiments and exploration.

There is already talk of Canada contributing an advanced moon rover for future missions.

“The next focus for exploration is to move deeper into space, to go to the moon and to Mars,” said Mike Greenley, group president of MDA, a leading space technology firm.

“And so the next series of projects, over the next five to seven years, will be to get back to the moon, and then over the next 12 to 15 years, to move beyond that to Mars.”

Canada has a long history of space involvement dating from the 1962 launch of satellite Alouette I to study the ionosphere. Since 1984, eight Canadian astronauts have taken part in 16 missions, and the Canadarm established the country as a leader in space robotics.

The latest tender allows industry to propose projects including, but not limited to:

— Communications systems for use on the moon;

The agency’s effort to engage industry is an encouraging sign of Canada’s interest in taking part in the next generation of lunar exploration, said Greenley.

As the Lunar Gateway project gets underway, Greenley expects international partners to call on Canada — given its expertise — to contribute artificial intelligence-based robotics to help build and operate the new orbiting station.

There will also be opportunities for Canada to take part in activities on the lunar surface — for instance by designing and building rovers and assisting with space mining, which will be key to extracting needed resources for a budding moon colony, he said.

A coalition of space-sector players including MDA recently launched a campaign — #DontLetGoCanada — to try to raise awareness of the country’s accomplishments in space and the benefits that flow from federal spending and support.

Greenley would like Canada to come up with a comprehensive space strategy to build on areas of traditional strength like robotics, rovers and space medicine.

“These are investments that would be substantial in size, but over a 15-year period or more,” he said.

“Canadians are very proud of our participation in space historically. So the support’s there for investment.”

It isn’t clear whether there is commitment at the highest levels of the Canadian government to make “the kinds of investments that are necessary” to take part in the Lunar Gateway and related programs, said Kate Howells, who serves on the federal space advisory board.

Canada’s space program has largely focused on projects that serve practical needs such as climate science, communications and Earth observation to monitor coastlines. Such initiatives also create well-paying jobs and help bolster the industry, said Howells, who works with The Planetary Society, a U.S.-based organization that promotes space science and exploration.

“We’re not putting money into orbit and letting it go out into space. We’re spending it here on Earth,” she said.

“But doing something like an ambitious exploration project is harder to defend government investment in. The arguments for it are sound, but they are nuanced. And I think that makes them a little less politically viable.”