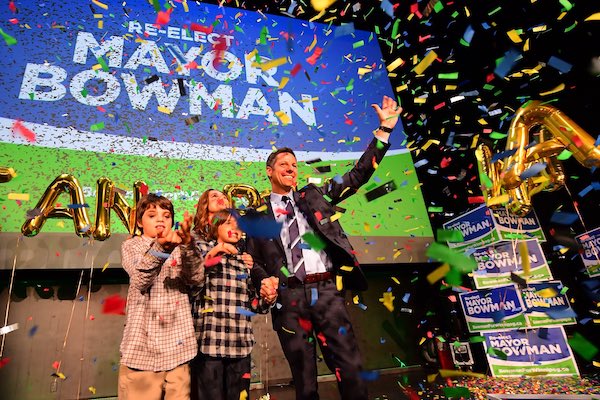 Brian Bowman celebrates with his family on stage at The Met on Wednesday, October 24, 2018 after winning a second term as Winnipeg’s mayor. (DAN HARPER PHOTO)

Bowman, Winnipeg’s 43rd mayor, was first elected in 2014 and defeated fellow frontrunner Jenny Motkaluk. Bowman had 53.30 percent of the vote over Motkaluk’s 35.72 percent.

Similar to his first campaign, Bowman ran on promises of increased openness and transparency at City Hall and moving the city forward to a population of 1 million residents.

“Over the last four years, I believe we’ve changed as a city,” Bowman said during his campaign. “I believe we’ve changed for the better, and that businesses and people are increasingly taking notice of Winnipeg’s tremendous economic advantages. I believe it’s important that a Mayor reflects strong confidence and pride in our city to attract business to Winnipeg and I am committed to do that.”

Eight candidates were vying for the city’s top job. Probe Research polls suggested Bowman led his competitors in a bid for re-election.

Some other mayoral offices are unlikely to see changes.

In Brandon, the province’s second-largest city, Rick Chrest was acclaimed for another term because no one ran against him.

In Portage la Prairie, incumbent mayor Irvine Ferris appeared to be on the road to being acclaimed, but Erik Lee, a former construction company owner, jumped into the race days before the deadline.