By Keith Doucette, The Canadian Press 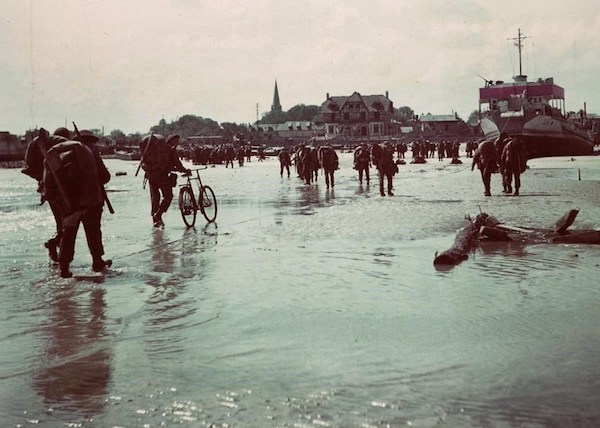 Some of the most vivid film footage of the D-Day landings 75-years ago was shot by a Canadian military film unit using technology obtained from U.S. allies. Canadian soldiers land on a Normandy, France beach during the D-Day invasion June 6, 1944. (THE CANADIAN PRESS/Department of National Defence)

HALIFAX — Some of the most vivid film footage of the D-Day landings 75-years ago was shot by a Canadian military film unit using technology obtained from U.S. allies.

Unlike the American and British beaches, the Canadian landings at Juno Beach were shot from inside the landing craft providing a visceral “first person” perspective, according to Dan Conlin, a historian and curator at the Canadian Museum of Immigration in Halifax.

Conlin said much of the footage, like that provided to The Canadian Press by the Juno Beach Centre in Normandy, was shot from magnetized cameras attached in the belly of the landing craft that would run automatically when activated by the boat’s coxswain.

“It really gives it this amazing point-of-view quality,” said Conlin. “I mean, you feel like you are in the assault craft with those guys waiting agonizingly for the shore to get closer and for those doors to be open.”

The cameras were obtained from the Americans by a Canadian Army unit that became renowned for its film and still photo work during the Normandy campaign. Conlin wrote a 2015 book on the unit titled “War Through the Lens: The Canadian Army Film and Photo Unit 1941 to 1945.”

He said the majority of the surviving and most well-known footage from the landing craft is of New Brunswick’s North Shore Regiment, which was part of the first wave of the Canadian assault on D-Day.

That includes perhaps the most famous film sequence shot in Normandy — that of a Canadian soldier anxiously looking behind him as he is patted reassuringly on the back by a comrade from the regiment’s No. 3 Platoon, A Company.

It’s a moment that was recently commemorated on a silver dollar struck by the Royal Canadian Mint.

“That one sequence is the classic one,” said Conlin. “It’s a wonderfully human moment as the guy turns around, and his buddy pats him on the shoulder with the wedding ring on the finger.”

It’s a shot that quickly went around the world, Conlin said, because the film unit had set up a retrieval process that ensured their rolls got to London by June 7.

“Most of it (Normandy footage) was pretty dull and very little footage managed to get out of the American beaches, and then this Canadian stuff started appearing on the screen and everybody was just amazed. So that’s what created this really iconic moment,” he said.

Conlin said a significant quantity of the original film didn’t survive Juno Beach because of water damage, or in at least once case, because the landing craft was blown up.

He said another significant setback came in the 1960s when all of the original film footage was destroyed in a fire at the National Film Board offices in Beaconsfield, Que.

“Bits and pieces of it have been known for years, but it’s only recently that people have taken the scraps from many newsreels … and spliced it together,” Conlin said.

Benjamin Moogk, a Toronto-based amateur historian who has been studying the Canadian film footage for years, said the sequences on the Juno Centre video are from three of the original rolls of film shot during the Canadian landings.

He said the first two sections of film depict the first wave of the assault, while the third is from a succeeding support wave, because it shows field medics, who weren’t part of the initial assault.

“The cameras with these three rolls were all within 300 metres of each other on the same stretch of beach for the North Shore Regiment,” said Moogk. “The house in the opening two minutes … still exists and the people who live in the area know about this because the film footage is used so often.”

Moogk said the Canadian footage was seen in theatres around the world for “two days straight” soon after making it to London on June 7 — well ahead of other Allied forces film, which didn’t start appearing in significant quantities in theatres until around June 16.

“It’s interesting that the first thing people see of D-Day around the world are the Canadians, although they are not always identified as such,” Moogk said.

Conlin said there is surviving footage shot by the U.S. Coast Guard of Omaha Beach, but it’s shot from a distance.

“None of it has the first-person power of the Canadian landing craft images,” he said. “That was kind of the triumph of that bit of filmmaking.”