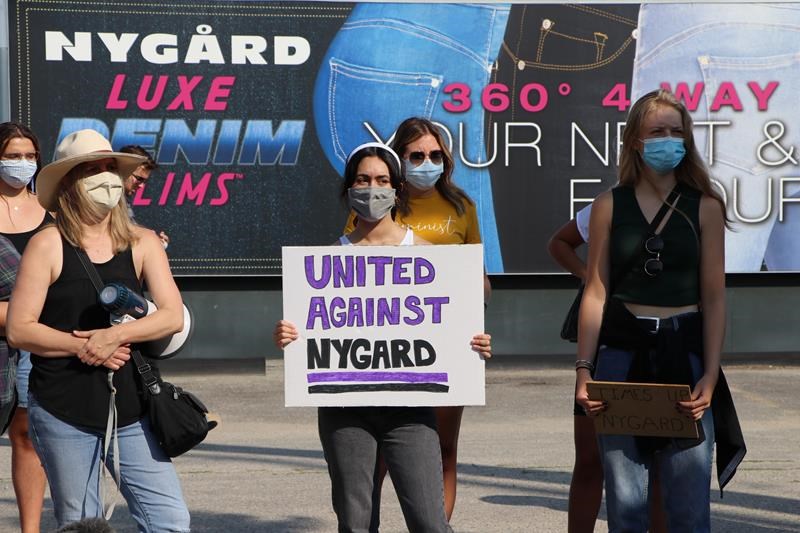 NEW YORK — A class-action lawsuit alleging a Canadian fashion mogul sexually assaulted dozens of women has been put on pause.

Fifty-seven women — including 18 Canadians — have joined the lawsuit, which alleges that Peter Nygard used violence, intimidation, bribery and company employees to lure victims and avoid accountability for decades.

Last Friday, the judge presiding over the case in the U.S. District Court for the Southern District of New York stayed court proceedings until further notice.

Court records show the judge’s order was sealed and access to information about why there was a stay has been restricted.

The sealing order prevents lawyers from commenting on why the case was stayed.

However, before the order was sealed, the court docket said the stay resulted from a government motion and named three federal prosecutors.

It also said the government would be required to inform the court when its proceedings were complete so the stay could be lifted.

The Department of Justice and the U.S. Attorney’s Office for the Southern District of New York did not respond to a request for comment.

Nygard has denied all allegations and blames a conspiracy caused by a feud with his billionaire neighbour in the Bahamas. He stepped down as chairman of his company after the FBI and police in New York City raided his offices in February.

In court filings last month, Nygard argued the New York court does not have jurisdiction to hear the lawsuit.

The original lawsuit against Nygard, 79, included allegations from 10 women who accused him of enticing them to his estate in the Bahamas. In the following months, more women from Canada, the United Kingdom and the United States have continued to add their names to the lawsuit.

The women, who are not named, have shared stories in court documents about being brought to Nygard’s offices and properties with promises of modelling or other career opportunities. Some allege they were given alcohol spiked with drugs before they were sexually assaulted.

Two women allege they were as young as 14.

The women are asking for a trial by jury and are seeking yet-to-be determined damages.

Two of Nygard’s sons filed a separate lawsuit against their father earlier this month claiming they were statutorily raped at his direction when they were teenagers. The sons say Nygard arranged for a woman to have sex with them. Nygard has said through his lawyer that he was shocked by the allegations and categorically denied them.

That lawsuit alleges Nygard’s sexual predation is an “open secret” at Nygard’s companies.

Speakers at a protest outside the fashion giant’s flagship Winnipeg store on Wednesday evening said many people have heard rumours about Nygard over the years and say justice is long overdue.

None of the speakers at the #TimesUpNygard rally were associated with the allegations against the fashion mogul.

Julie Guard, a history and labour studies professor at the University of Manitoba, said it’s important for women to support each other to stop misogyny and predatory behaviour by rich and powerful men.

“Women are mustering up their courage and standing together to call out these people who have preyed on them,” said Guard.

“Sometimes it’s hard for us to speak up if we face sexual harassment at the workplace,” she said. “Now is the time to join the movement and to say ‘Time’s up,’ and … to address the root cause of the issue and address gender equity.”