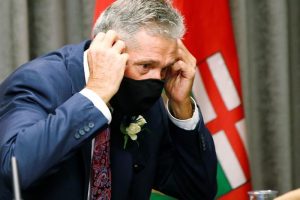 Manitoba premier Brian Pallister puts on a mask after speaking to media prior to the reading of the Speech from the Throne at the Manitoba Legislature in Winnipeg, Wednesday, October 7, 2020. (THE CANADIAN PRESS/John Woods)

“I have never found it difficult to admit my own failures when it comes to sports, business or political life and I am perfectly willing to take charge of my own improvement,” Pallister said.

“I have to now tell you that I believe Manitobans deserve to get an improved system with better testing, shorter lineups (and) faster response times.”

The government will open a new test site in Winnipeg next week and another the following week, Pallister said, along with more sites in Brandon, Winkler and other communities.

The government is also in discussion with doctors to have access to their offices after hours for testing.

And a new course will be up and running at Red River College in the coming weeks to train workers to perform swabs and other duties, the premier added.

COVID-19 numbers have been spiking in recent weeks, especially in Winnipeg. Health officials reported 67 new cases across the province Thursday, 57 of which were in Winnipeg. The number of active cases in Manitoba reached a record-high 863.

The Opposition New Democrats accused the government of being slow to react. Case numbers started climbing in the latter part of summer. Demand for tests skyrocketed in Winnipeg more than a month ago as kids returned to school.

“There are serious questions about why the government is only making these moves at this late date,” NDP Leader Wab Kinew said.

Pallister said the health system did not anticipate the late summer surge in demand for testing.

“We had anticipated that demand would come a little later than this,” Pallister said.

“This (pandemic) is an unprecedented thing.”

The government is also looking to set up separate areas for seniors and other higher-risk people to get tested. The province may rent space in large venues such as convention centres, Pallister said.

“Some of those arrangements have already been made, but … the detail and the materials and the staffing all have to be ironed out yet.”