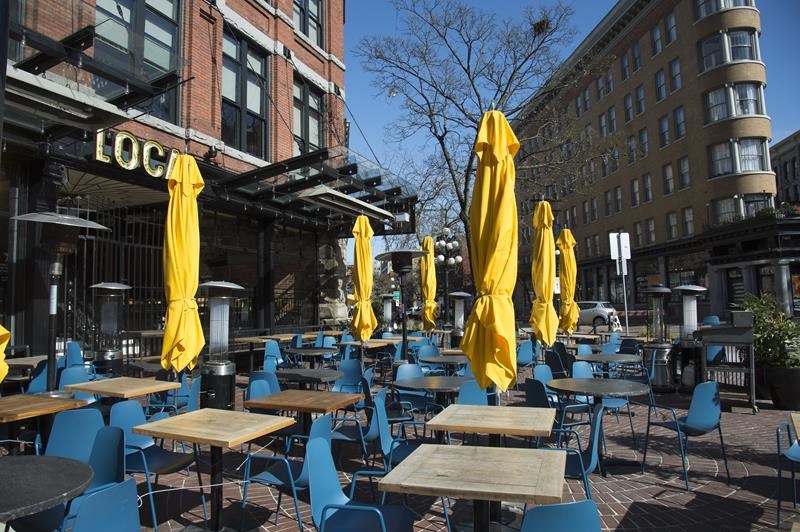 An empty patio is seen on St. Patrick’s Day in Gastown in downtown Vancouver Tuesday, March 17, 2020. (THE CANADIAN PRESS/Jonathan Hayward)

TORONTO — Officials across Canada are relying on common sense and added restrictions in some cases rather than on the traditional luck of the Irish to keep St. Patrick’s Day from becoming a COVID-19 super-spreader event.

Amid worries about a third pandemic wave, health authorities are urging would-be celebrants to be mindful of the risks and obey all limits on social gatherings.

The city of Kingston, Ont., for example, home to Queen’s University, has made live music off limits. The order, which is in place until the end of the week, bars all social gatherings of more than five people and, among other things, limits the sale and service of alcohol.

“It breaks my Irish heart to have to do it but I do think it’s prudent,” said Dr. Kieran Moore, medical officer of health for Kingston and area said in announcing the measures. “Last year, before we went into lockdown, there was significant social activity associated with St. Patrick’s Day and it did put our community at risk.”

Failure to comply could result in daily fines of up to $5,000 for individuals and $25,000 for businesses, the city said.

Queen’s Alma Mater Society warned students of the risks of flouting the measures, and urged people to stay home and drink responsibly.

“Pandemic gatherings pose a greater risk to the community,” the society said. “Be smart, celebrate safely, and stay home this St. Patrick’s Day.”

British Columbia has ordered bars and restaurants to stop serving alcohol at 8 p.m. on St. Patrick’s Day, putting a damper in what would typically be a huge night for them.

“(People) can let their guard down,” said Al Johnson, with WorkSafeBC. “We don’t want that to happen.”

Dr. Bonnie Henry, the province’s medical officer of health, said the aim was to prevent an explosion of new COVID-19 cases as has been the case with other holidays.

Inspectors would be out in force to ensure compliance, the province said.

In light of the pandemic, some people planned decidedly non-traditional ways of celebrating the occasion.

“Just found out my dad is getting vaccinated in Hamilton this Wednesday!” federal Infrastructure Minister Catherine McKenna said in a tweet. “What a way for him and our family to celebrate St. Patrick’s Day!”

Some areas, like Manitoba, said they would be relying on existing measures to curb alcohol-fuelled gatherings that could hurt efforts to contain the pandemic.

“We already have time restrictions on restaurants and licensed premises,” said Dr. Brent Roussin, the province’s chief public health officer. “So, we’ll follow our same process for the most part on the restrictions.”

Bylaw officers in Ottawa, where limits on gatherings and alcohol serving were already in place, were also planning to step up enforcement.

“This is probably not the year to go and party or to have a party at your own home, Mayor Jim Watson has warned.

The city advised celebrating virtually or to stay within household bubbles if going out.

In Atlantic Canada, pubs will be closed or have limited seating, while those in Prince Edward Island will have to obey strict attendance limits, including a ban on mixing and mingling.