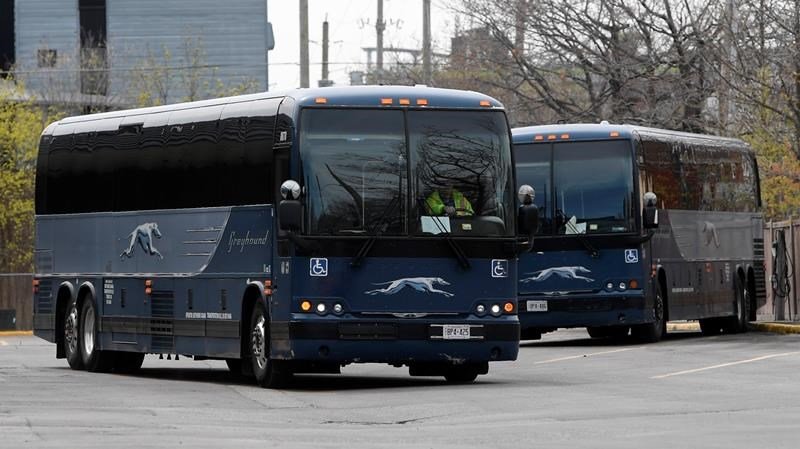 A Greyhound bus is driven out of the bus terminal in Ottawa Thursday, May 7, 2020, in Ottawa. (THE CANADIAN PRESS/Adrian Wyld)

Greyhound Canada is permanently cutting all bus routes across the country, shutting down the intercity bus carrier’s operations in Canada after nearly a century of service.

The motor coach company said its remaining routes in Ontario and Quebec will cease permanently on Thursday.

Its American affiliate, Greyhound Lines, Inc., will continue to operate cross-border routes to Toronto, Montreal and Vancouver once the border reopens.

The decision comes a year after Greyhound Canada temporarily suspended all service due to a sharp decline in passengers and mounting travel restrictions amid the first wave of COVID-19.

The bus carrier has struggled for years with declining ridership, increasing competition and deregulation.

But the complete loss of so-called farebox revenue during the pandemic has forced the company to permanently cease operations, said Greyhound Canada senior vice-president Stuart Kendrick.

“It’s been a very tough decision and one we’ve taken with a heavy heart,” he told The Canadian Press in an interview. “It’s been a lifeline for many Canadians for more than 90 years. This will have a massive impact.”

The decision is a blow to rural and remote areas that rely on a patchwork of private intercity bus companies for transportation.

The service has long been part of a network linking smaller communities and big cities, offering an affordable and convenient mode of travel for everyone from essential workers and students to the elderly and backpackers.

Yet the rise in car ownership, ride sharing, discount airlines and urban migration has slowly eroded bus ridership, leading Greyhound Canada to gradually reduce the frequency of some services and cut other routes altogether.

“Private carriers are relying on the farebox revenue to maintain these rural routes,” Kendrick said. “When ridership declines, we have a decision to make. We either cut the frequency, exit the rural markets or look for some help.”

Yet despite the ongoing challenges with its remaining routes, nothing could have prepared the company for the dramatic 95 per cent drop in passengers at the outset of the pandemic, Kendrick said.

Multiple coach bus companies teamed up and approached the federal and provincial governments for financial aid amid mounting COVID-19 restrictions. But Kendrick said they were referred to existing pandemic supports — what he called “negligible” for the beleaguered passenger transportation industry — prompting Greyhound Canada to temporarily suspend all service last May.

“There’s really been a lack of support,” Kendrick said. “We don’t get subsidies.”

The Ontario government has also promised to deregulate the intercommunity bus industry starting in July, a move that would end Greyhound Canada’s control of certain routes.

“We have had exclusive private bus service on certain corridors,” he said, noting that it provided passengers with safe, frequent and affordable service.

“Greyhound Canada’s tough decision today is going to have a massive impact on customers, especially those riding in the rural network.”

About 260 employees were laid off after Greyhound Canada temporarily ended its passenger service last May. An additional 45 employees will be laid off as a result of the permanent closure, Kendrick said.

The company plans to sell the bus stations it owns, he said. As for its leased properties, some of the agreements have expired or have an “out clause,” while it will honour the terms of leases it’s obliged to continue paying, Kendrick said.

The company said tickets for travel after Thursday will be refunded. Customers with a valid travel voucher can also request a refund.

All Ontario and Quebec routes that were temporarily suspended in May 2020 will permanently end as of midnight on Thursday. The routes are:

The pandemic has had a debilitating impact on Canada’s struggling intercity bus industry.

Coach bus companies have reduced service frequency or cut routes due to the precipitous drop in ridership, threatening to erode the country’s transportation network.

The Charlottetown-based company had warned that without funding, it would have to cut routes.

The senators said that with Via Rail service suspended and airlines slashing flights to the region, the bus was needed for essential travel, such as transporting blood products or patients to health appointments across the region.

In January, the New Brunswick government stepped in to provide $720,000 to the private regional bus operator to maintain service to Edmundston and Campbellton in the province’s north.