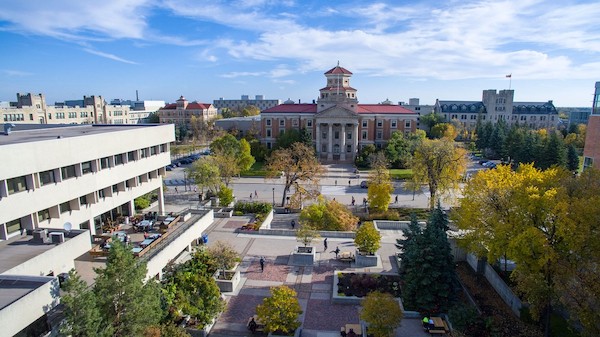 The Central Energy Plant and Max Bell Centre at the University of Manitoba are receiving funding to improve energy efficiency and reduce greenhouse gas emissions on the Fort Garry campus. (UMANITOBA.CA)

The provincial and federal governments are investing more than $25 million in local infrastructure improvements, including energy upgrades at the University of Manitoba.

During an announcement Friday in Portage la Prairie, officials unveiled a list of projects that will improve access to water infrastructure in several municipalities, create an urban tree canopy in Selkirk, and build or renovate key facilities in several locations across Manitoba.

The U of M’s Central Energy Plant and the Max Bell Centre building on its Fort Garry campus in Winnipeg will receive more than $14 million from Ottawa. The improvements will benefit all 41 major buildings on campus by improving their energy efficiency and reducing greenhouse gas emissions.

The urban canopy in Selkirk will see the planting of native trees near sidewalks and active transportation trails at a cost of $1.8 million in combined funding from both levels of government.

“The projects announced today promote sustainability, improve public spaces, and help build safe and healthy communities,” said Reg Helwer, Minister of Central Services. “Sustaining and supporting communities throughout Manitoba is something that we continue to work toward on a daily basis. Improvements to infrastructure ultimately make stronger neighbourhoods and communities.”

A new community centre in Oakville will replace the existing community hall that is nearing the end of its lifespan. The new 10,500-sq.-ft. community centre will serve as a hub in the community and centralize community, cultural and sporting venues in one location.

In Brandon, the Keystone Centre will receive $86,000 from the feds to extend the service life of the roof over the facility’s Manitoba Room.

Aside from federal and provincial contributions, the projects will end up receiving more than $26.9 million combined from other funding partners.

The complete list of projects can be found below.