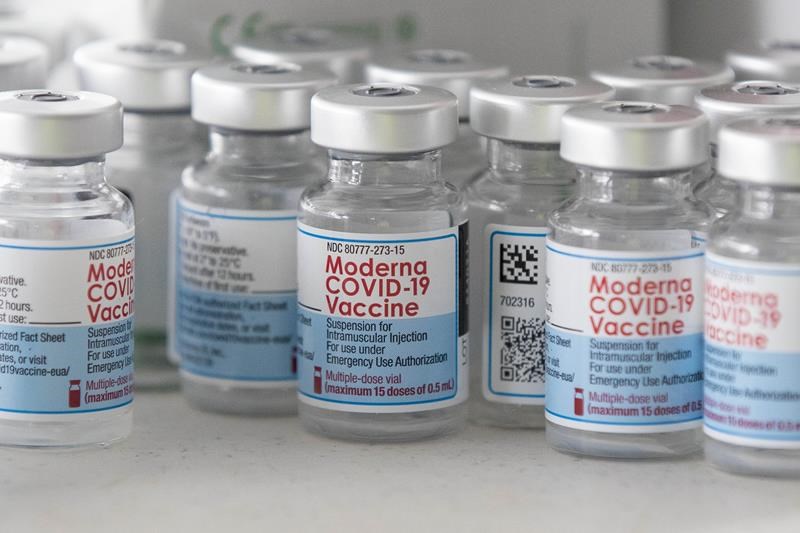 The company has signed a memorandum of understanding with the federal government that will result in Canada becoming the home of Moderna’s first foreign operation. It’s not clear yet how much money Canada has offered to Moderna for the project.

“I believe that this technology can allow Canada to be ready for the next virus,” Bancel said at an announcement in Montreal.

“Whether it’s a small outbreak, or a big pandemic, like the one we just saw — God forbid — Canada will be ready. We’ll be ready on Canadian soil to make, in a matter of months, a new vaccine for a new emerging virus to protect the Canadian population.”

The agreement will see Canada gain access to Moderna’s mRNA “development engine,” get priority access to the doses, and Bancel said Canada can also ask Moderna to shift its production lines to respond to a new or emerging threat.

It will also include a research and development component not just for COVID-19, but for a host of other conditions, including the flu, heart disease, cancer and rare genetic disorders.

This new technology has already changed millions of lives, Bancel said, but over the next 10 to 20 years he believes it will change millions more.

Canada, whose life sciences industry has been decimated over the last three decades, wants in on the action. Prime Minister Justin Trudeau has promised to rebuild the industry, and the recent budget included a $2.2 billion, seven-year investment to grow the life science and biotech sectors.

Almost half of that targets companies that want to expand or set up vaccine and drug production in Canada. None of the COVID-19 vaccines to date have been made in Canada, leaving the country entirely reliant on imports to fill vaccine orders so far. As a result Canada was slower out of the gate on immunizations than some of its counterparts who had domestic production, and it appears likely had to pay more per dose for some vaccines as well.

Innovation Minister François-Philippe Champagne, who made the announcement with Bancel in Montreal, said Canada’s new commitment to life sciences and biotech companies is attracting a lot of attention from companies, including Moderna.

“It’s no secret that every country in the world wants a COVID-19 vaccine made in their country,” he said.

Bancel said similar agreements are now being negotiated with other countries as well.

The location of the new facility hasn’t been finalized, but Bancel said the availability of an educated workforce will be the main deciding factor. He said the design is done and they’ll need to start hiring very soon so training can begin.

Moderna’s COVID-19 vaccine, one of two messenger RNA or mRNA vaccines currently authorized, is one of the most effective thus far against the virus that causes COVID-19, and Bancel said recent results showed it is almost as effective after six months as it was after two.

This is the second major deal Ottawa has made to get mRNA vaccines made in Canada in the last three months.

In May, Champagne said Ottawa would provide $199 million to Resilience Technologies in Mississauga, Ont., about half the cost of expanding its existing plant to make up to 640 million doses of mRNA vaccines every year.

Canada has also promised $126 million for a new National Research Council to build a biologics production plant in Montreal.

That facility, which is nearing completion, is to make vaccine for Maryland’s Novavax. The company had expected to request final authorization for its COVID-19 vaccine last spring but thus far that has not happened. Last week the company cited production consistency issues, when it delayed its expected request to the United States until the fall. It is the third time Novavax delayed its U.S. filing.

It began a rolling review for authorization with Health Canada last winter, but the final approval has still not happened in this country either. Novavax is a subunit protein vaccine, not an mRNA vaccine.

Canada also promised more than $400 million to help Sanofi complete a $925-million expansion of its vaccine production plant in Toronto. The existing plant mainly makes flu vaccines, and the expansion will focus on that as well.