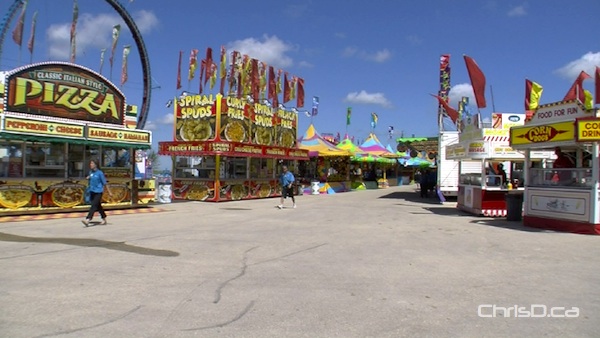 The Red River Ex midway prior to the gates opening for the season on Friday, June 15, 2012. (CHRISD.CA)

A 13-year-old boy is facing charges after allegedly unleashing bear spray at the Red River Ex on Sunday.

The incident happened at about 3:15 p.m. when the teen and a group of friends became engaged in a confrontation with another group of people. Winnipeg police say the teen began spraying the liquid in all directions, where several bystanders were hit.

Police say the teen was also carrying a loaded pellet gun. He’s facing seven charges of assault with a weapon, possession of a weapon for a dangerous purpose, and two counts of failing to comply with the condition of an undertaking. He’s being held at the Manitoba Youth Centre.

Security at the Red River Ex already perform random pat-downs and bag checks, but will be stepping up enforcement in light of the incident.