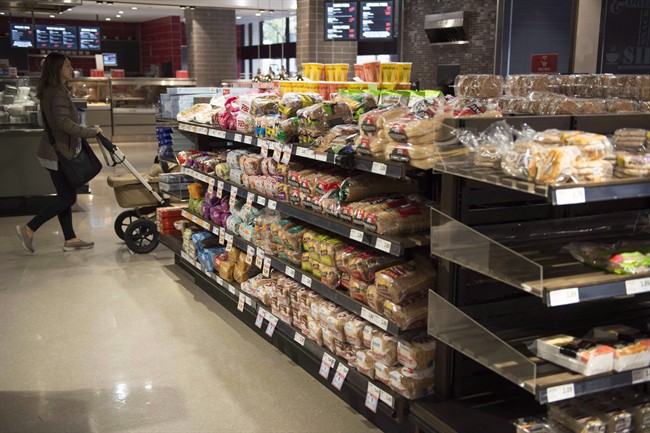 Various brands of bread sit on shelves in a grocery store in Toronto on Wednesday, Nov. 1, 2017. (THE CANADIAN PRESS/Doug Ives)

VANCOUVER — Loblaw Companies Ltd. is offering customers a $25 gift card as a goodwill gesture after admitting the company participated in an industry-wide bread price-fixing arrangement.

“This conduct should never have happened,” said Galen G. Weston, CEO, during a conference call with analysts Tuesday.

“The gift card is a direct acknowledgment of that to our customers. We hope that they’ll see it as a meaningful amount that demonstrates our commitment to keeping their trust and confidence,” he said in response to how the company arrived at the card’s $25 value.

Here’s how to redeem the offer:

Customers can visit LoblawCard.ca and enter their email address to be notified once registration opens.

The company expects registration to begin on Jan. 8.

Full details will follow, but broadly speaking, visitors to the site will have to declare that they are the age of majority or older, said spokesman Kevin Groh, in an email.

The age of majority is 18 in Alberta, Manitoba, Ontario, P.E.I., Quebec and Saskatchewan. It is 19 in B.C., New Brunswick, Newfoundland, Nova Scotia and the three territories.

They will also have to declare that they bought certain packaged bread products at one of the eligible banner stores in Canada before Mach 1, 2015, he said.

Loblaw and George Weston Ltd. revealed Tuesday that they participated in an industry-wide bread price-fixing arrangement from late 2001 to March 2015, but tipped off Canada’s competition watchdog and will receive immunity in the ensuing investigation.