Indigenous Artwork to Be Displayed on Billboards to Honour Residential Schoolchildren 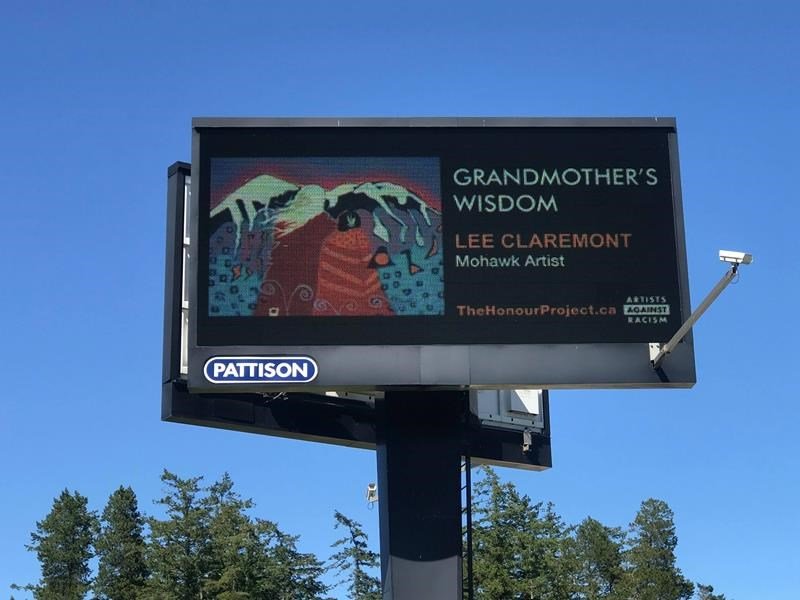 Work from eight Indigenous artists, including Lee Claremont, will be displayed on hundreds of billboards across Canada as part of the Honour Project to raise awareness about the remains of children found in residential schools. (THE CANADIAN PRESS/HO-Lisa Cherry)

Cree artist Betty Albert woke in the middle of the night after learning remains of possibly 215 children had been found at the site of a former residential school in British Columbia and looked at a canvas in her house.

Soon after, her hand holding a brush that seemed to almost move on its own, she began to paint.

“The colours were just coming. I didn’t second-guess it,” said Albert, who is based in Winnipeg.

“That painting painted itself.”

The piece was finished in only a few hours. It depicts a mother draped in cloth holding a baby. The washed-out orange colour around her is speckled with 215 white dots. It is named “215.”

Her piece is part of a project displaying artwork by Indigenous artists on hundreds of billboards across the country to honour children whose remains have been found and those who are still missing.

Lisa Cherry, the campaign director, said the project was organized by Artists Against Racism after the Tk’emlups te Secwepec First Nation in Kamloops, B.C., announced last month that ground-penetrating radar had detected what are believed to be the remains of 215 Indigenous children.

She said art can break cultural and language barriers, heal and education.

“We decided to do a large visible campaign to further help with education and awareness,” Cherry said. “It’s a massive way to reach almost every Canadian and honour the children and their spirits in a large way.”

The group has previously done billboard campaigns for missing and murdered Indigenous women and girls. Cherry said the artists realized it’s important to reach people with a message accessible everywhere: on the way to work, in a subway or on a rural road.

Eight Indigenous artists from across Canada are participating. Their pieces will hang on 500 digital billboards donated by Pattison Outdoor. If more billboard space becomes available, the project will expand, Cherry said.

The project is to run for the entire month.

Albert said she feels as if people are finally realizing the full extent of the harm caused by residential schools.

She was adopted as a baby and grew up in northern Ontario. Albert reconnected with her father later in life and heard the stories about his time at one of the schools.

Her art has always connected to women and spiritualism. She said her painting for the project was about reflecting the care and tenderness children were deprived of at the schools.

“What I really wanted to do was hold those babies and set them free.”

Colleen Gray’s artwork called “The Homecoming” was her way of dealing with the pain and trauma of the discovery in B.C.

“I tried to paint what I was feeling in the moment,” said Gray, whose roots are Mi’kmaq in New Brunswick.

“I was feeling rage and I thought this must just not be me. This is sweeping across the country.”

Her piece depicts a bear to represent that rage. But she also wanted to show hope so Gray painted a grandfather holding his child in joy.

Gray said there is immense value and healing in art. She said she hopes that means the billboard project will help survivors and their families heal.

She also said it means that people can no longer say they didn’t know about this dark part of Canada’s history.

“I see art as a way back to the basics of understanding we are all connected.”